In 1891, Grant Wood was born on a farm Anamosa, Iowa on February 13, 1891. After the unexpected death of his father the family moved to Cedar Rapids.

Wood’s grammar school teacher, Emma Gratten, is credited as the first person to support his interest in art. At the age of fourteen, Wood won first prize for a drawing of oak leaves. During his high school years, he befriended artist Marvin Cone and together, they designed sets for the school’s theater department. After graduation, Wood left for a summer course taught by nationally known architect and designer Ernest Batchelder at the Minneapolis School of Design and Handicraft.

In 1913, Wood relocated to Chicago, where he set up a jewelry and fine metalwork shop. Occasionally, he enrolled in evening drawing classes at the School of the Art Institute of Chicago. Over the next several years, he took correspondence and summer school courses in the decorative arts and even served in the U.S. Army as a camouflage designer. In 1919, he returned to the family home in Cedar Rapids and took a position as a grammar school teacher in order to support his mother and his younger sister.

After a brief summer trip to Paris in 1920, Wood returned to France three years later to study at the Academie Julian. On a sabbatical from his teaching position, he also traveled with artist friends to Sorrento, Italy. Looking back, Wood referred to these times as his “bohemian years.” When he returned to Iowa, he adopted an impressionist style of painting.

In the 1920s, Wood earned fame as an artist in the local community. In 1927, he was commissioned to complete a stained-glass window for the new Veteran’s Memorial Building in Cedar Rapids. Wood was sent to Germany to oversee the production of the stained glass window at specialist workshops. During his three month stay in Munich, Wood saw early German and Flemish paintings for the first time.

His admiration for the works of the German and Flemish Old Masters was a major turning point in his career. Abandoning the Impressionist style, Wood adopted the extreme Realist style of the fifteenth and sixteenth century Flemish school. Working with a tighter brushstroke and a darker color palette, the artist completed his most memorable works upon his return from Munich.

In 1930, his painting American Gothic (1930) was accepted into the juried annual exhibition of the Art Institute of Chicago and won the bronze medal. Wood’s painting of a woman, man and pitchfork received almost overnight success and brought him public attention.

In the years following the exhibition of American Gothic, critics presented Wood to the public as the leader of American Regionalism. Drawing upon memories from his early childhood spent on a farm, Wood exemplified the Regionalist style through his paintings of small-town folk and life in the Iowa countryside.

In 1932, he opened a summer art colony and school in Stone City, Iowa. The art colony attracted many aspiring Midwestern artists and was Wood’s attempt yet to establish the Midwest as a significant art center. After two summers, Wood closed the art colony and accepted a position as an associate professor in the art department of the University of Iowa.

In 1935 Wood married actress and opera singer Sara Maxon. Their marriage proved to be difficult and the two divorced in 1939. Wood was further embarrassed by the government’s discovery that he had failed to pay income taxes for the past three years.

During the same period an argument developed between Wood and the University of Iowa’s art department. Faculty members supported the new abstract art trends and argued that Wood’s teaching style and paintings were outdated. Feeling betrayed by the department that he had made famous, Wood requested a leave of absence in 1940. Wood died from pancreatic cancer a few hours before his 51st birthday on February 12, 1941. 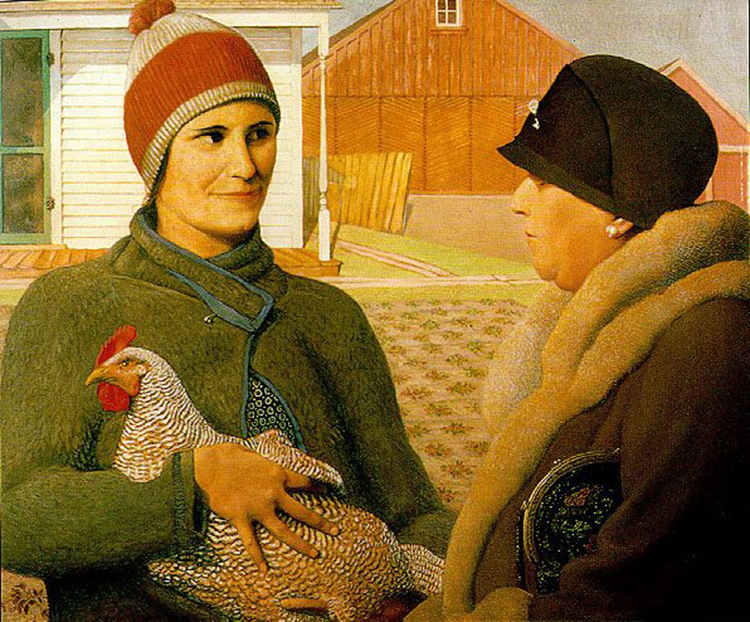 The year after Grant Wood won national fame for American Gothic (1930), he experienced another year 1931 of remarkable productivity.  The recognition gave him a burst of energy and confidence that led to a series of important paintings, such as The Birthplace of Herbert Hoover, Midnight Ride of Paul Revere, Fall Plowing, and two paintings in the Dubuque Museum of Art collection: Victorian Survival and Appraisal.

Wood entered “Appraisal” into the Iowa State Fair art competition, where it won the sweepstakes prize in 1931.

When it was first exhibited, it included a chicken wire fence along the bottom, but Wood cut off that section, giving it the dimensions you see today.  He also changed the title.  Initially entitled Clothes, that term emphasized the clearest contrast between the two women pictured. The scene is an encounter between a city woman and a farm woman. The farm woman is dressed for work: a striped stocking cap and woolen jacket held together by a safety pin.  The city woman wears a fur-lined coat and a fashionable hat decorated with a fancy pin. Each woman is holding something: the city woman has her beaded bag holding her money while the farm woman holds her hen.  We assume that the hen will end up as the city woman’s Sunday dinner.

The title “Appraisal” is expressed in the stares of the two women.  The city woman’s eyes, shadowed by her tailored hat, look down on the prospective meal.  The farm woman, aware that she is being overlooked, focuses on her customer.  She isn’t impressed.  The farm woman’s self-possession suggests that she does not feel inferior to the city woman. In 1931, one of the lowest years of the Depression, this farm woman retains her dignity, secure in the knowledge that she is able to sustain herself and her family on the farm.  The young plants just emerging in the background tell us that it is spring. 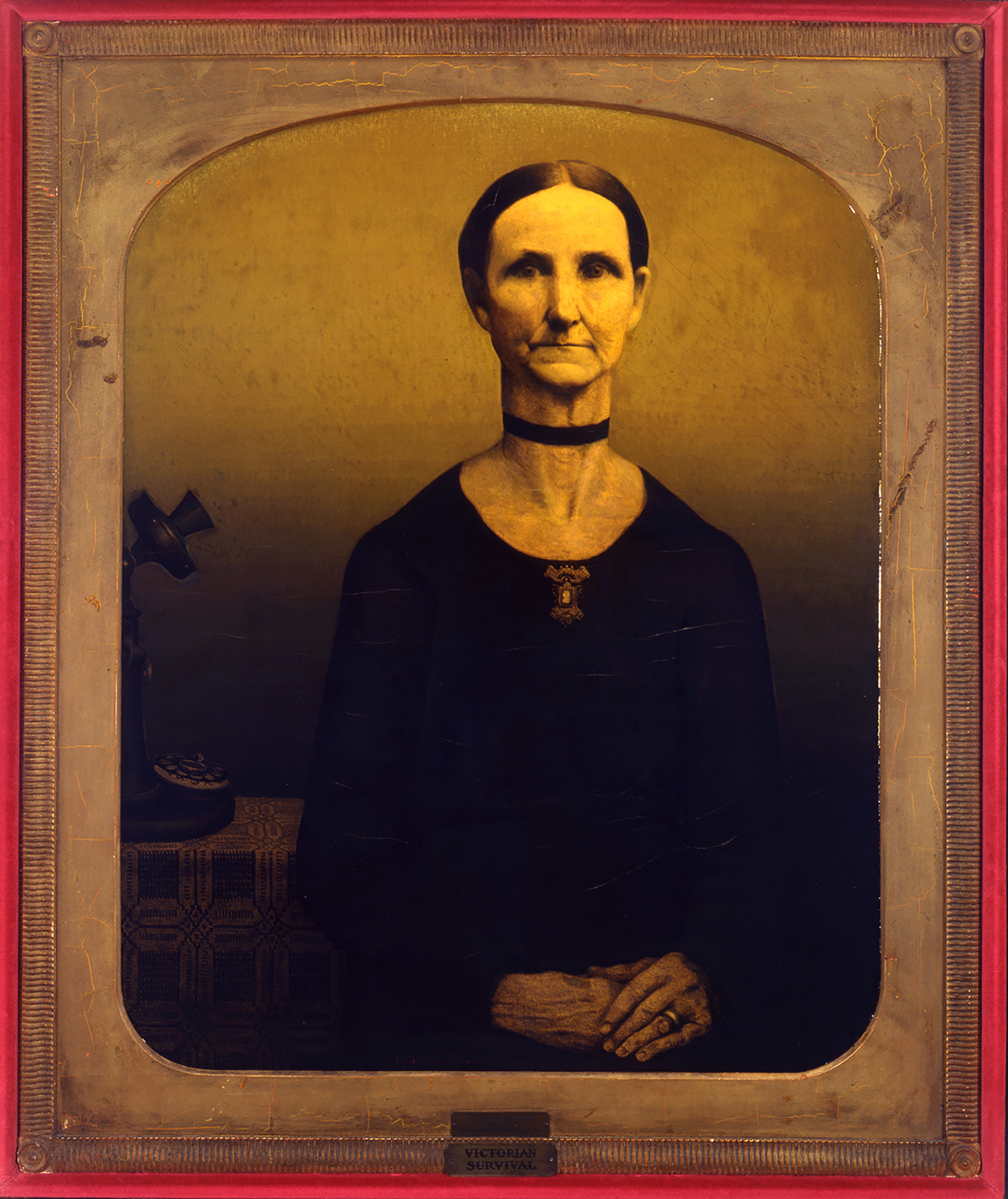 Painted in 1931, Victorian Survival is Wood’s satirical homage to the settled world in which he grew up, a world into which technology was intruding.

Victorian Survival is based on a tintype of Grant Wood’s great aunt, Matilda Peet.  From memory Wood fashioned a stiff, solemn figure dressed in black.  The brooch and the black neck band make her look even more forbidding. We notice the telephone inserted into the picture.  Although it is very different from telephones today, we recognize it as a modern intrusion into her quiet, self-contained world.  Its placement moves her slightly off center in the painting. Any moment, the phone will ring, and disturb the composure of this Mona Lisa of the Midwest. It is a clash between the traditional and the modern, between the safety of the old world and the frightening prospect of the new.