Donald Friedlich was born in Montclair, New Jersey and received his BFA in Jewelry and Metalsmithing from Rhode Island School of Design in 1982. He has been a leading figure in contemporary American jewelry and has served a term as President of the Society of North American Goldsmiths (SNAG) and earlier as Chair of the Editorial Advisory Board of Metalsmith magazine. His jewelry has been shown in galleries and museums all over the world and is in the permanent collections of the Victoria and Albert Museum, the Smithsonian American Art Museum, the Museum of Fine Arts Boston, the Cooper Hewitt Design Museum, the Corning Museum of Glass, the Museum of Fine Arts Houston, the Los Angeles County Museum of Art, and many others.

In 2010 Friedlich toured China and lectured at universities in Shanghai, Beijing, and Hangzhou. In 2011 he was the keynote speaker at the annual conference of the International Society of Glass Beadmakers and a featured speaker at a jewelry conference in Dubai, UAE. In 2012 he was an Artist in Residence at California College of Art in both the glass and metalsmithing programs for the spring semester. In 2015 he joined the Board of the Craft Emergency Relief Fund (CERF+). In 2016 he lectured at the Smithsonian’s Renwick Gallery in Washington, DC as part of the Distinguished Artist Series and was the keynote speaker at the annual SNAG conference of the SNAG in Asheville, NC and was selected for what is widely considered the preeminent annual jewelry exhibition in the world in Munich, Germany. In 2017 he received an award from SNAG in recognition of his extensive service to the organization and the field.

There are few things in the world more important to me than food and humor, but I had never thought to bring either of them into my jewelry, until recently. I’ve worked abstractly and most often geometrically for my whole career as a jeweler, so my recent Organic Series designs, cast from oranges, asparagus, celery and other foods, are a major departure for me.

I had the idea for this body of work for more than five years, but thought it was frivolous, so kept pushing it aside. Eventually, though, the only way to get it to stop haunting me was to make a piece of jewelry and see it if it was worthy of pursuit. In the end, I came to feel that transforming commonplace materials such as food, into glass, allowed viewers and wearers to see the beauty and elegance of their forms in a new light. Plus, the idea of wearing an apple or a stalk of celery as a brooch makes me smile.

The addition of digital technology into my work about ten years ago has been very important, as it greatly expanded the form options at my fingertips. The two Aqua Series Brooches, inspired by rippling wave patterns in water as well as the raked patterns of sand in the Zen gardens of Japan, provide a good example. They would be impossible without computer aided design (CAD) and computer-controlled machining (CNC) of my graphite molds. These works and the Magnification Series Brooch are made by pressing 2000F glass into the graphite molds. After the glass cools over twelve hours, in a laborious process, it is ground down with diamond abrasives to its final form and then set in 22k gold. Between the setting and the glass is a layer of a metal called niobium, that can be anodized to vibrant colors. This punches up the color of the brooch, but it has a secondary benefit of being archivally stable. It will never tarnish like silver does.

For many years, I’ve sought to identify qualities that are unique to jewelry as a medium. One I’ve focused on is that jewelry is seen in motion. In my Lumina Series Brooch, I’ve exploited this movement in such a manner that the brooches appear to dramatically shift in color when viewed at different angles. This brooch made from dichroic glass, a material that has unique optical qualities that I exploit. In a process originally developed by NASA for the visors of the astronauts, a thin layer quartz and metal oxides are vaporized onto the glass to form a colored mirror surface. This series is in part inspired by the effect of sunlight that is reflected by the moon and at times, diffused by cloud cover or fog. The light sculpture of James Turrell and the color field paintings of Mark Rothko are also inspiring to me. 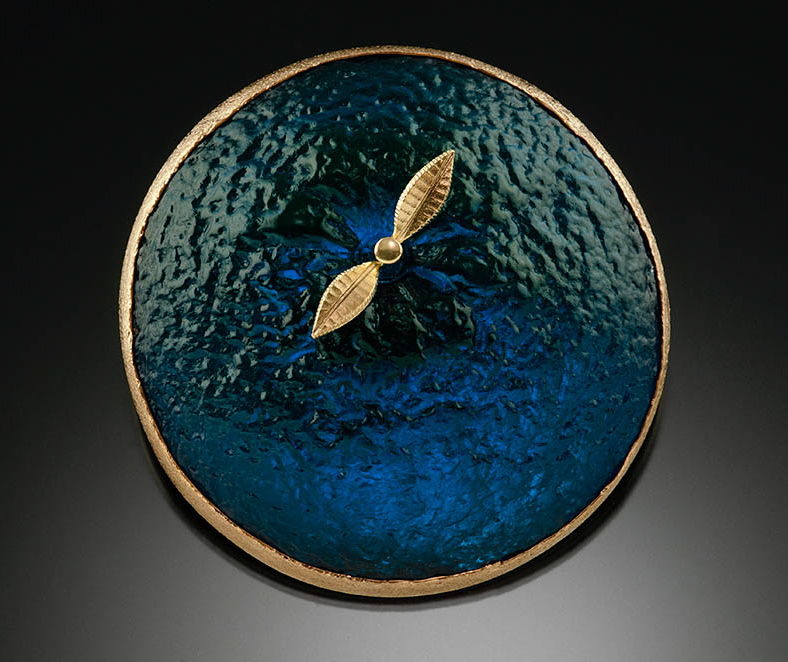 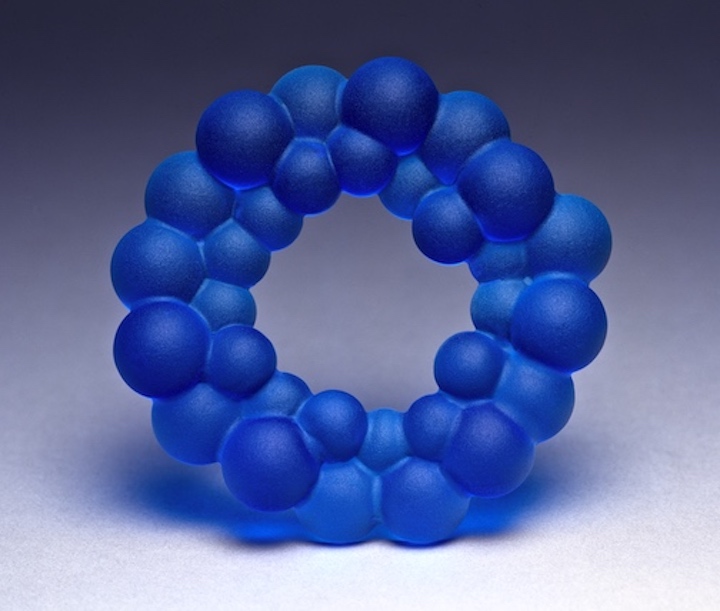 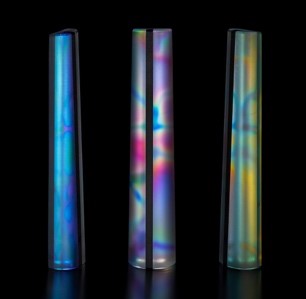 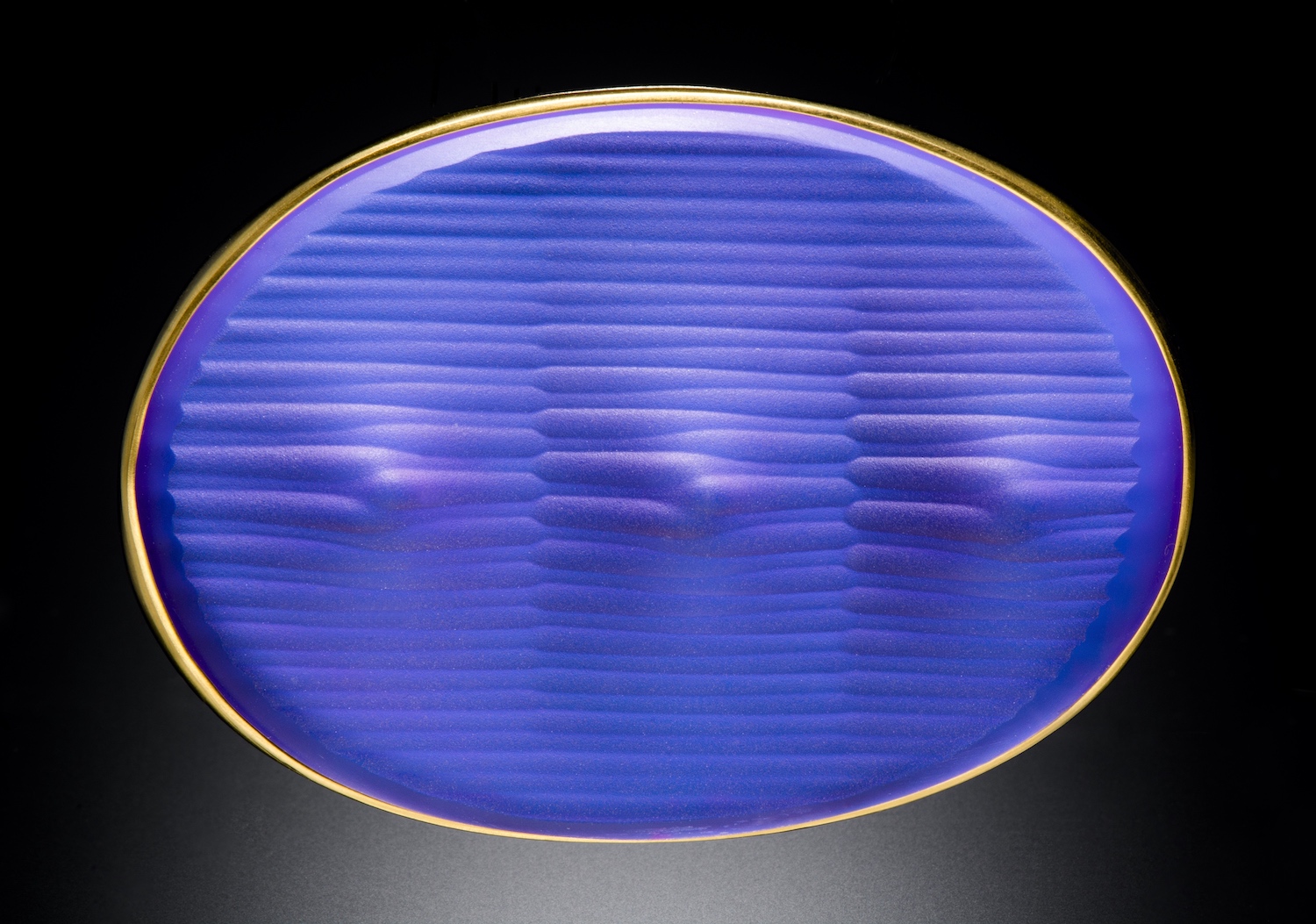 A CONVERSATION ABOUT CRAFT