Volumes have been written about art with discussions of craft often an afterthought. Art history’s use of painting as the standard classification left three-dimensional works (such as crafts, ceramics, and sculpture) fighting for their rightful place with the same status as the painted image. The curator of ceramics at the Victoria and Albert Museum summed up his frustration when he quipped, “Ceramics is occasionally the subject of art history, but more often it is its victim.” Fariello’s talk challenges today’s art world vision and is sure to spark a lively debate.

Curator, scholar and author of eight books, Anna Fariello is a former Smithsonian Renwick Fellow in American Craft where her research focused on the southern craft revival.

A zoom link will be available.

Tova Brandt, Executive Director of The Museum of Danish America in Elk Horn, Iowa will present a talk: “Danish Immigration to Iowa.”

Like all immigrants, Danes who arrived in Iowa adapted to a new landscape, new culture, and new opportunities. Brandt will discuss what motivated Danes to come to Iowa, what they contributed to the history of this state, and how Danish heritage can be explored and celebrated today. Tova will incorporate examples from the Art Nouveau exhibition. 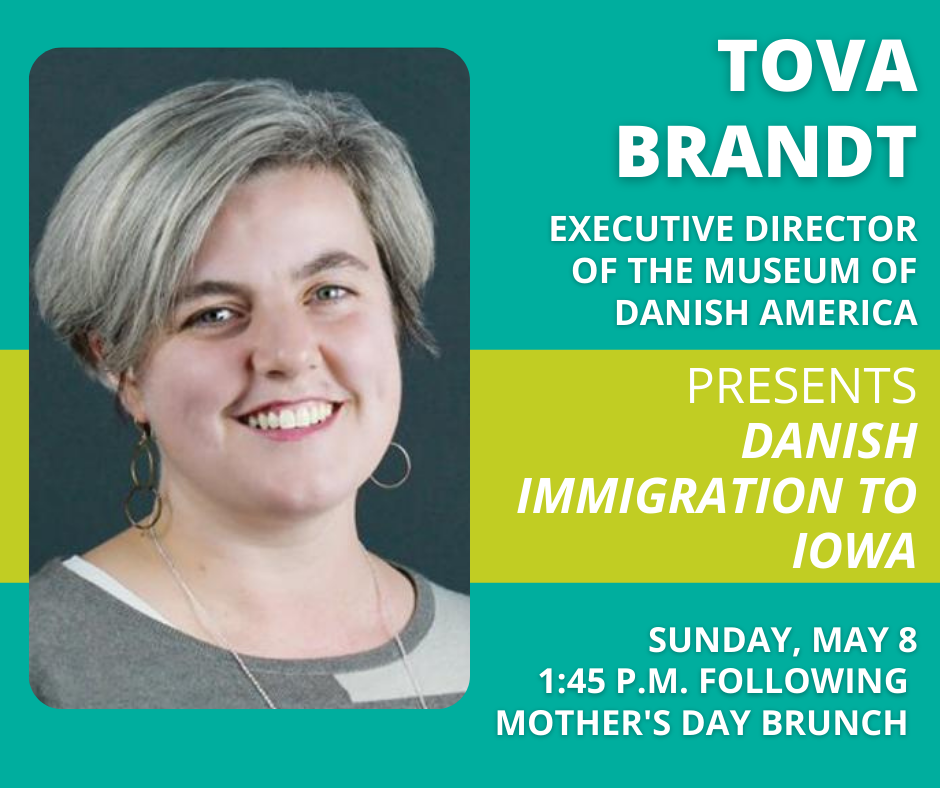 Author, historian, and broadcaster Jeff Stein will present “From the Battlefront to the Homefront: Iowa Broadcasters Go to War,” the story of Iowa journalists who covered conflicts from World War II to the Gulf War.

This talk is made possible by the Humanities Iowa Speakers Bureau.

Hosted in conjunction with the Grant Wood Art Colony, University of Iowa.

In Grant Wood’s Secrets, the title of her talk and new book, author and professor Sue Taylor incorporates original research and close readings of Grant Wood’s iconic, as well as lesser-known, artworks to reveal how the artist’s sometimes anguished psychology and art was shaped by his close relationship with his mother.

Presenting Wood’s unfinished autobiography “Return from Bohemia” for the first time ever, Sue Taylor integrates the artist’s own recollections into fresh interpretations of his art. Dr. Sue Taylor holds advanced degrees in art history from Roosevelt University and the University of Chicago. Taylor has worked as a museum curator and newspaper critic as well as a professor of art history.

Free admission. Bring a sack lunch if you wish, but food will not be provided by the Museum.

Making the Connection: An Introduction to French Moderns

French Moderns: Monet to Matisse, 1850 – 1950, an exhibition organized by the Brooklyn Museum, will be on view at the Figge Art Museum from October 6, 2018 to January 7, 2019.  Featuring 59 paintings and sculptures, the exhibition begins with the academic painters of the 19th century, such as Gerôme and Bouguereau, then moves on to artists who turned to nature for their inspiration, such as Corot, Millet and Boudin. It features works by all the leading Impressionists—Monet, Cezanne, Renoir and Manet–and some lesser colleagues, such as Morisot, Sisley and Caillebotte, as well as artists from England, Italy and Germany who aligned themselves with the movement. Also included are iconic sculptural works by Auguste Rodin and Edgar Degas. Their successors, such as Matisse, Bonnard and Chagall, pioneered new approaches to image-making, as did artists from elsewhere in Europe, such as Gabrielle Münter and Chaim Soutine, all included in the exhibition.

Get ready for the exciting exhibition! This 45-minute art talk offers an introduction to the traveling exhibition, with background on some of the artists and their styles.

For information: Margaret Buhr, Director of Education, at 563 557 1851 or mbuhr@dbqart.org

Join DuMA for Time Capsules: Photography and Anachronism, a lecture by photography historian and curator George Slade focusing on the Museum’s current exhibit Remnants of the West: Edward S. Curtis and Mark James.

Both Edward Curtis and Mark James use their photographic skills to transport us into other times and spaces. How do their images reflect photography’s unique capacity to represent history? This lecture will explore the question specifically in regards to Curtis and James, and more broadly as a phenomenon singular to the medium.

Lecture is free. Attendees are invited to tour the museum galleries and exhibit Remnants of the West after the talk at no charge.

A CONVERSATION ABOUT CRAFT